Become a SLEB member to access this feature, and more! 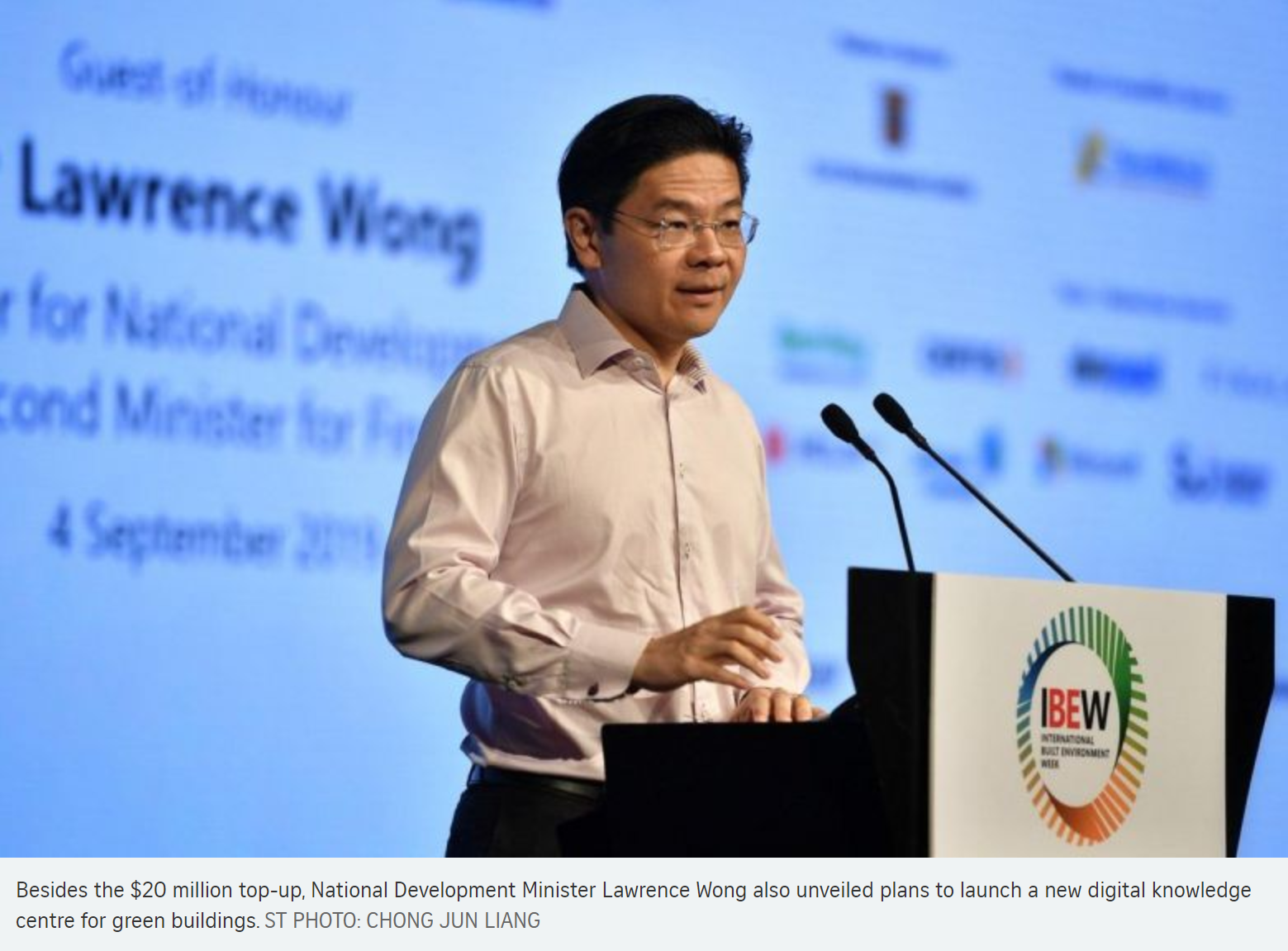 SINGAPORE - A national fund to encourage developers and building owners to introduce eco-friendly innovations is getting a $20 million boost.

The top-up of the green building innovations fund will encourage more tie-ups between the built environment industry and the research community, said National Development Minister Lawrence Wong on Wednesday (Sept 4).

The $20 million top-up was among several measures that he announced to raise productivity in the built environment sector.

Mr Wong said the construction industry has been “a laggard in productivity and technology adoption”.

Noting that more than 90 per cent of Singapore’s new building projects today have adopted building information modelling (BIM), a 3D model-based process that makes the planning, design and construction of buildings more efficient, he said there is nonetheless more work to be done.

“Ninety per cent sounds like a very high number but there is a difference between submitting a plan using BIM because the Government requires it to be so and truly using BIM from start to finish,” he said.

“Are you really harnessing the full benefits of BIM? You (industry players) know the answer better.”

The $20 million adds to the initial $52 million provided by the National Research Foundation for the GBIC programme when it was launched in September 2014.

Over the past five years, the GBIC has supported a total of 32 projects, including a six-storey, super low-energy building housing an operations centre at the upcoming Tuas Terminal mega port that is expected to be completed by the fourth quarter of next year. The building manages all terminal operations for the first phase of the Tuas port from 2021.

Mr Wong also unveiled a new digital knowledge portal for green buildings. The Super Low-Energy Buildings Smart Hub - the first in South-east Asia - contains the energy data of 2,000 buildings in Singapore. It also has a Smart Advisor function which uses artificial intelligence to predict the costs and energy savings of adopting green technology for building owners.

A digital platform that allows for the sharing of data among the various segments of the construction industry is also in the works.

The Hubble platform is developed by Delphi, a joint venture between construction company Woh Hup and local tech company Hubble, and is expected to roll out in phases from the end of next year.

Currently, different segments of the industry from architects and engineers to contractors and fabricators use different BIM software that are not compatible with each other, which Mr Wong said “hinders collaboration... and defeats the purpose of digitalisation”.

BCA chief executive officer Hugh Lim acknowledged the challenges of digitalising a “very traditional” industry but said companies who put off the process risk getting left behind.

“To be fair to the industry players, they want to get the job done on time and on budget. There are higher initial costs when adopting green or technological solutions so they might choose to stick with the tried-and-tested option,” he said.

“But we are optimistic because we see the companies who have (adopted new technology) pulling ahead and this helps us get across our message to the industry.”

The International Built Environment Week will run until Friday. More than 12,000 local and overseas visitors from the construction industry are expected at the event, which features a combination of seminars, trade shows and networking sessions.